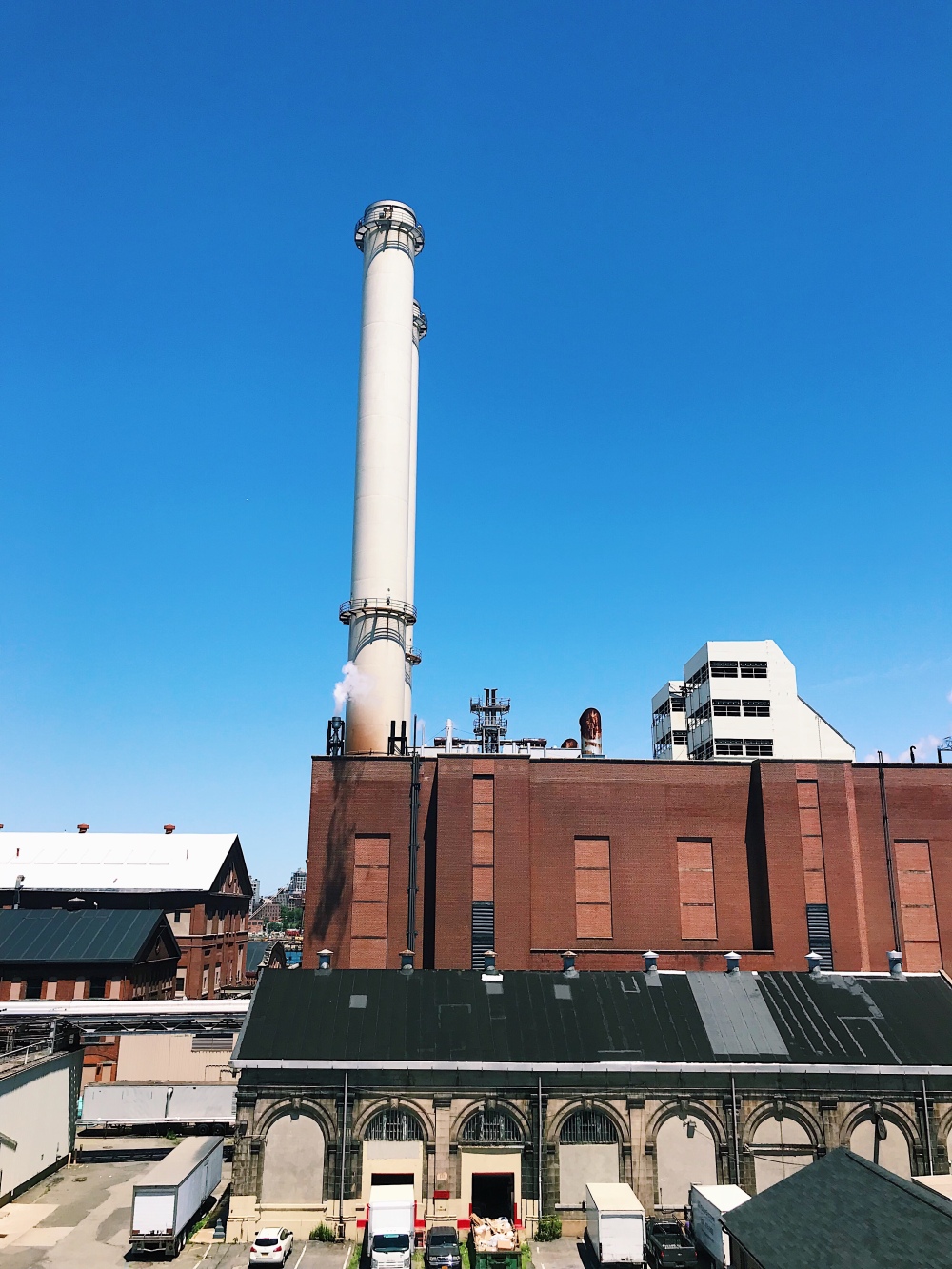 One of the many buildings in the Brooklyn Navy Yard. What’s inside, nobody knows!

I’m not an expert on New York City. I don’t pretend to be and if nothing else, this blog has proved that I’m nowhere close to even having a cursory knowledge on how this city works. That being said, I still usually feel like I have a grasp on where I am, what I’m doing, and what to expect. It seems important to have your wits about you in this town, especially when you’re showing your friend around the city trying to convince her not to move. If you’ve been keeping up with this feature, you’ll know that my recent attempts to get my friend Kate to not move to Boston have fallen short. So perhaps it was time to switch things up. Perhaps it was time to try a place I knew very little about, always seemed shrouded in mystery to me, and was actually the venue for a mutual friend’s birthday. If you haven’t guessed by now, I’m talking about spending an afternoon with Kate at the Brooklyn Navy Yard.

The first time I became aware of the Navy Yard, I was looking at a map of Brooklyn. “I’m not a service member, so this doesn’t apply to me,” and I kept scanning the map for a beach or a bar, because I’m a bum. The second time I took note of the Navy Yard I was in a late night cab when we took a route I’d never taken before. We passed the Navy Yard and I saw a sandwich board advertising coffee. “I guess even sailors need caffeine,” I thought, and I had the cab driver drop me off at a beach or a bar. More recently I finally got a more realistic picture of what the Navy Yard is from someone who would actually know, someone in their 70’s who’s seen all of the exciting (?) changes take place at “The Yard.” He told me how there was a winery, some shops, businesses, ya know, your classic case of Navy Yard repurposing. “Sorry, sir, you must be confused. It’s called the NAVY YARD. Keyword there is NAVY. Sea men don’t drink wine except on Fleet Week.” I then got a long history lesson on the relationship between service members and self medication, PTSD, and veterans affairs. Depressing stuff. This is all to say there was an air of mystery surrounding the Navy Yard. So with the opportunity to attend our friend Claire’s birthday party at the Navy Yard, I thought discovering the secrets of the Yard together may be the perfect way to convince Kate to stay in Brooklyn.

Hey, this place doesn’t look like it’s shrouded in mystery and sadness at all! There’s a swing!

The first step in securing entry to the Navy Yard was to reserve a ticket to the winery that was on the roof of one of their buildings. Claire sent us all links to an Eventbrite page with specific times we would be allowed to visit. The mystery around the Navy Yard was growing more and more…mysterious. I’ve only used Eventbrite for events such as Grilled Cheese tastings or mandatory work trainings. Never to visit a former shipbuilding yard to get sloshed. With our confirmation emails in hand, Kate and I arrived at the Navy Yard, truly unsure what to expect. We were met by a driveway, a single gate that was meant to keep cars out (but honestly if you were determined you could totally bust through it), little to no sign of human life, and a security box that we were told we had to use to scan our reservation. We stood around it, looking probably like a couple of cavemen who had just recently become unfrozen, the ways of the modern world causing our brains to melt and leak out of our nostrils. Out of nowhere a woman appeared. “Going to Rooftop Reds? You’re good.” And as suddenly as she appeared, she vanished. I’m fairly certain she was a sea ghost.

Walking the Yard only further cemented my theory that this place was lousy with sea ghosts. While there was a huge factory style building every two feet, there was pretty much no human beings in sight. Clearly, all the sea ghosts were hiding and would only make themselves known when we found ourselves in a pickle. We had a building number in our confirmation email and when we finally found building 275, we wandered around trying to find a door. A sea ghost appeared and showed us an appropriate entrance and we were on our way to get wine drunk with some sea ghosts. And Claire. 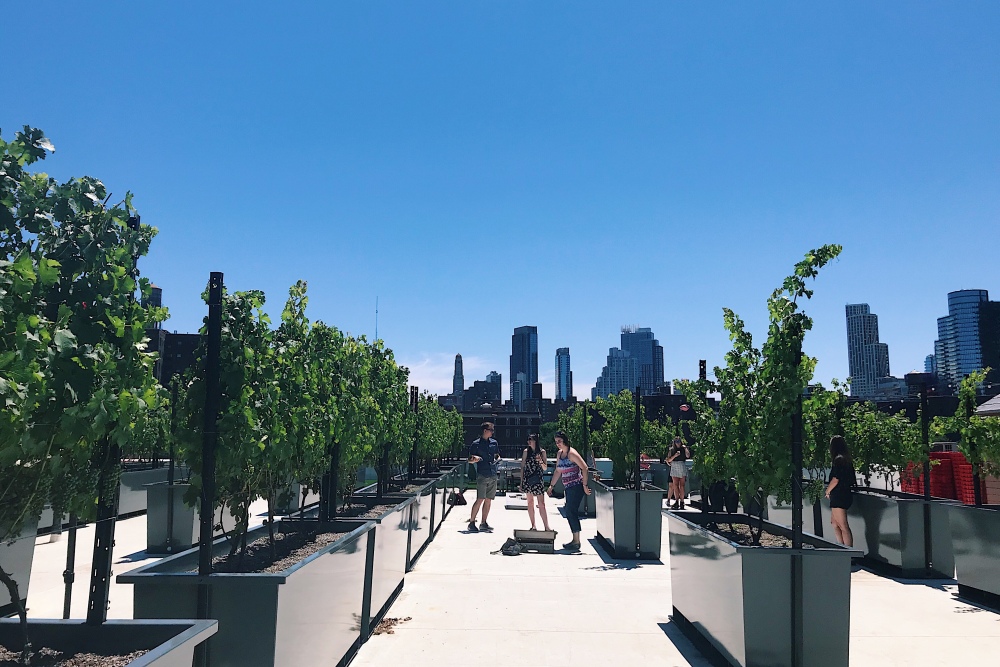 When we reached Rooftop Reds it was like we passed through a portal into a different place and time: a spacious, hipster winery in no way resembling the abandoned warehouse feel of the rest of the Navy Yard. No sea ghosts here, just real people and real grapes and real vines! Despite the fact that we had to reserve a spot ahead of time, I could count the number of other guests on my hands. So, around 10. It’s rare to be in a place in New York City that is large and sprawling and also not overrun with people. We met up with Claire and the rest of the birthday party for wine tastings, more wine, some corn hole, some talk of the World Cup, and some talk of food. That’s when the sea ghosts among us made themselves known. The bartender knew without us even really needing to tell her that we wanted to order pizza, and without a moment’s hesitation presented us with a menu from a local pizzeria that would deliver all the way to the roof. It wasn’t long after that when another sea ghost came over to tell us all about the fun activities offered at Rooftop Reds, almost like she knew how confused we were by the space we were in. They had sunset yoga, birthday parties, baby showers, box socials, you name it, they would host it. Say what you will about sea ghosts, they’re helpful and have a wealth of information. But they really do appear and disappear at the drop of a dime.

Wines that were assuredly poured by a sea ghost

With our wine successfully drunken and our pizza successfully delivered and eaten, we decided it was time to check out what else the Navy Yard had to offer. The only problem was that everything seemed closed and there were no sea ghosts present on our way out. So we decided to go to the King’s County Distillery, located right before the exit from the Yard into the real world. Who knew if time stood still on the other side of that exit. What if time sped up and everyone we know and love was now 60 years older? Or dead? Or 2 hours older, the amount of time we had spent at the winery? We weren’t ready to find out, so we ducked into the distillery to avoid the inevitable. 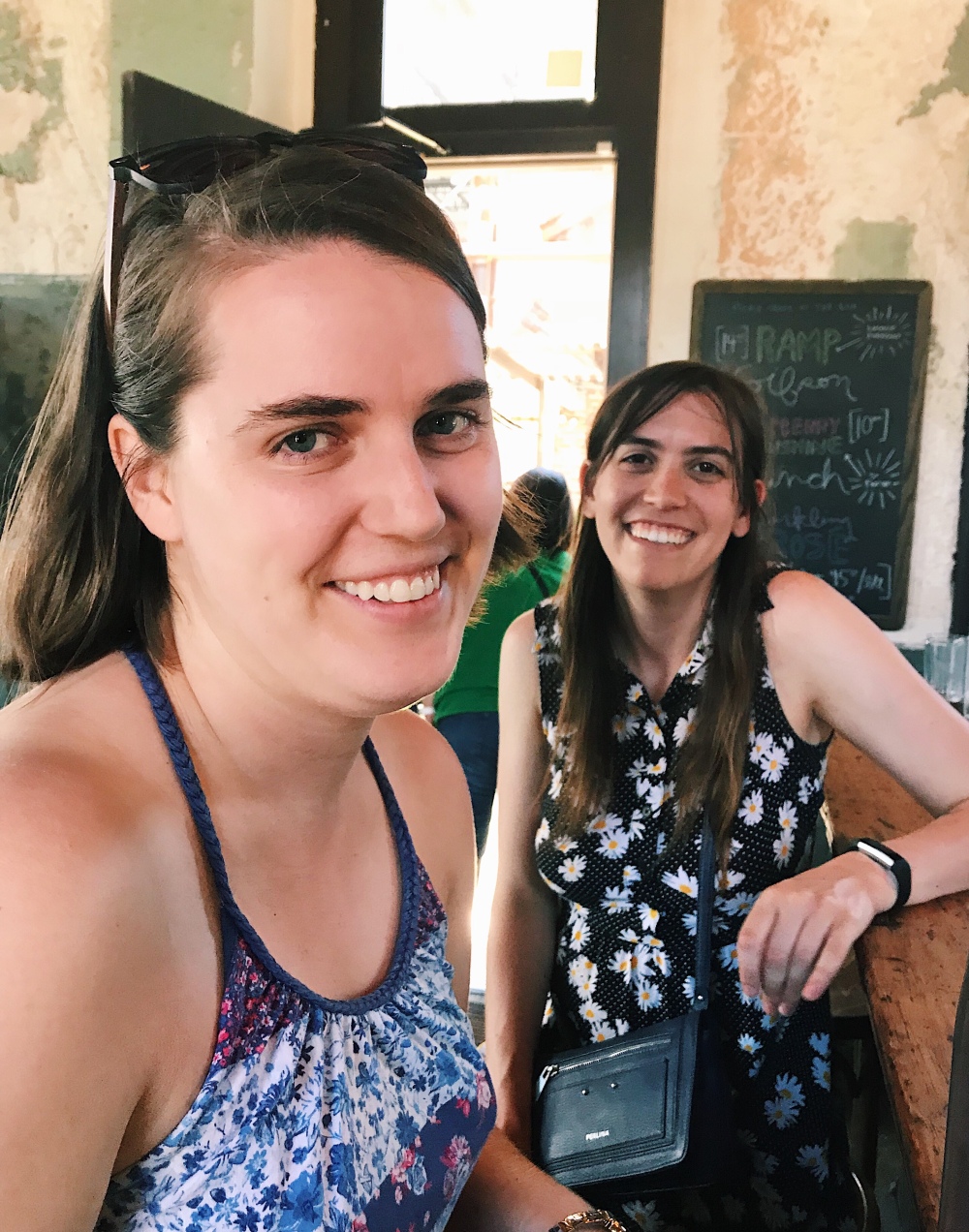 Kate and Claire, blissfully unaware of what’s going on in the outside world

Advertised as the oldest whiskey distillery in New York City, would you be surprised if I told you it was founded in 2010? Because it was. Nothing about the Yard makes sense. Time truly is a flat circle. The building the distillery is housed in has kept its old school charm, with chipping paint, weird layouts, secret books, and plants! The bottles of whiskey look like they’re still being produced in the Prohibition Era, but the cocktail list is straight up 2018 Brooklyn. I reiterate, time is a flat circle. After ordering our cocktails and finding a tiny table amongst the foliage, we set up shop, pulled up the World Cup game on my phone (because time apparently hadn’t stood still), and drank our whiskey drinks surrounded by hipsters, old buildings, and probably a bunch of sea ghosts. At the end of the game, we moved to the backyard area, which we all decided wasn’t as romantically trapped between multiple eras as the inside.

Our little green area at the distillery. Not pictured: our cocktails. Actually pictured: our coffees and waters that we brought from home because you have to make sure you’re awake and hydrated while stumbling through a potential portal into another dimension

Finally we left the Yard and I looked to Kate for answers. Would she stay in the city? Did I finally do it? What year is it? It was a confusion that all of us felt, and when I looked in the rear view mirror as we pulled away from the Navy Yard, I saw a sea ghost tip his cap at me approvingly. He mouthed out the words, “You’ll never truly understand this place,” and then disappeared in a cloud of bubbles. I again searched Kate’s face for answers. But she was looking up car rentals to Boston. Maybe next time I’ll find us an excursion that feels a bit more solidly placed in this time period. Or maybe I’ll continue failing. 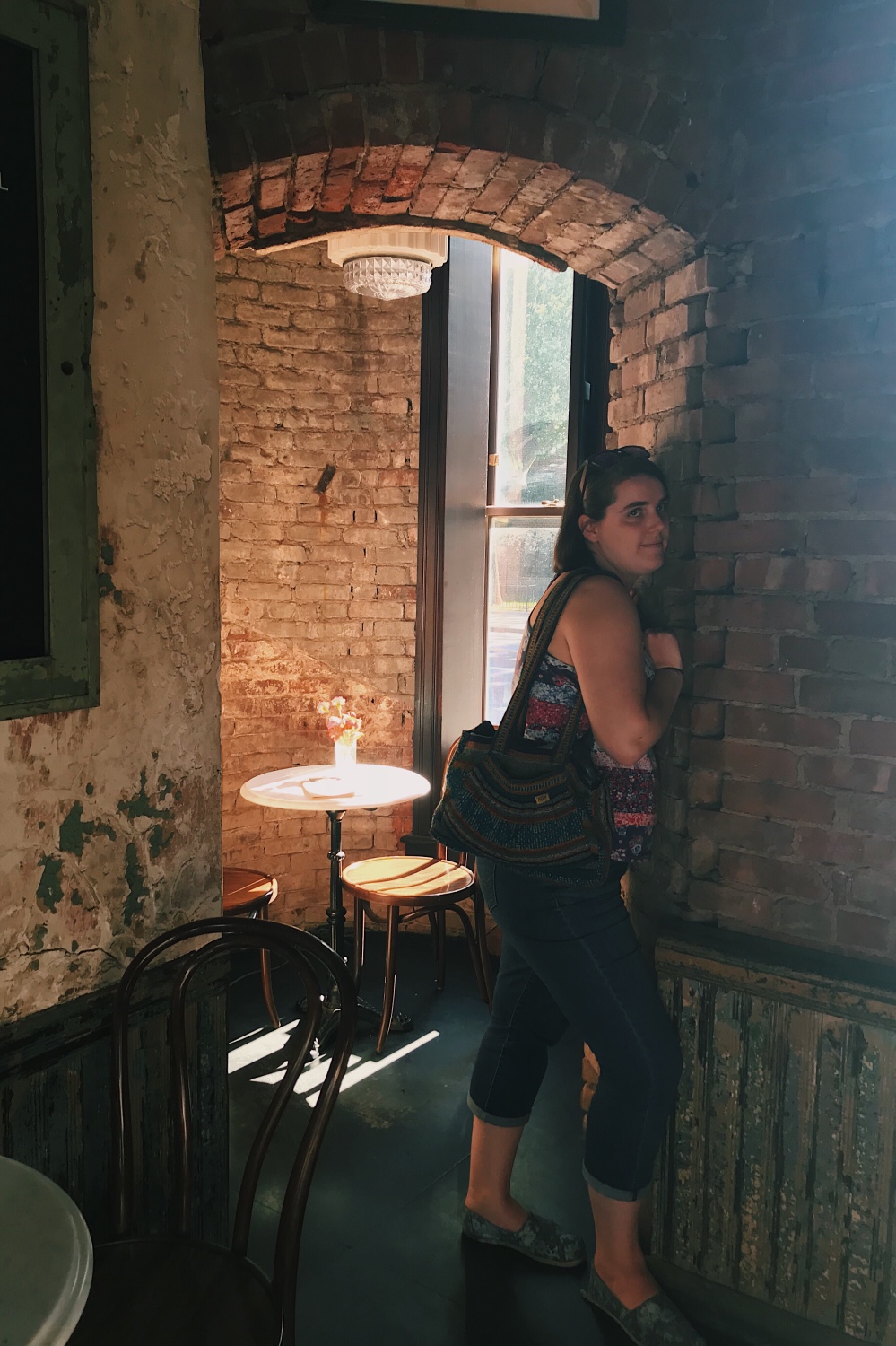 For a brief moment, Kate almost fused with the walls of Kings County Distillery. The Yard will make you do mysterious things

I Love You, New York? Do you love me?

Recent stops off the G