Don’t worry, this ooey gooey goodness will all make sense in good time

I know what you’re all thinking: “Where’d you go? You promised us you’d stick around this time and educate us on all things along the G, while simultaneously sprinkling in fun anecdotes about your life. You didn’t hold up your end of the deal!” To which I respond, “Oops, I fucked up. Also, we never had a deal and you don’t know my life,” even though, truth be told, most of you do know my life. But that’s neither here nor there. The long awaited return of Off the G is here, just in time for New York to start heating up and smelling like garbage. So what better way to beat the heat than to sit in front of a computer and read about some ice cream I ate! We’re kicking off the return of the Off the G blog with a post all about Brooklyn Farmacy and Soda Fountain in Carroll Gardens.

The outside of Brooklyn Farmacy, or as I like to call it, “A dream in ice cream colored pastels.”

If you’re unfamiliar with the old timey soda shops of Brooklyn, you might think I’m suffering a brain injury and desperately pleading with my readers to get me to a pharmacy and buy me some drugs to alleviate any swelling and pain I may currently be enduring, but the head injury is impeding my ability to properly type out “pharmacy.” I’m trapped in my own brain, begging my dear readers to put me out of my pain and get me some medication. Nope! Wrong again! Jeez, my hypothetical readers are constantly hypothetically misunderstanding what the places are I’m posting about. You guys should really hypothetically get it together. Farmacy is actually an ice cream/soda pop shoppe that looks straight out of Back to the Future or Pleasantville, both very timely references. The major difference here is not as much chrome, a lot more wood, but no young Elijah Wood playing an arcade game. If none of that makes sense to you, put down your books and watch TV every once in awhile. 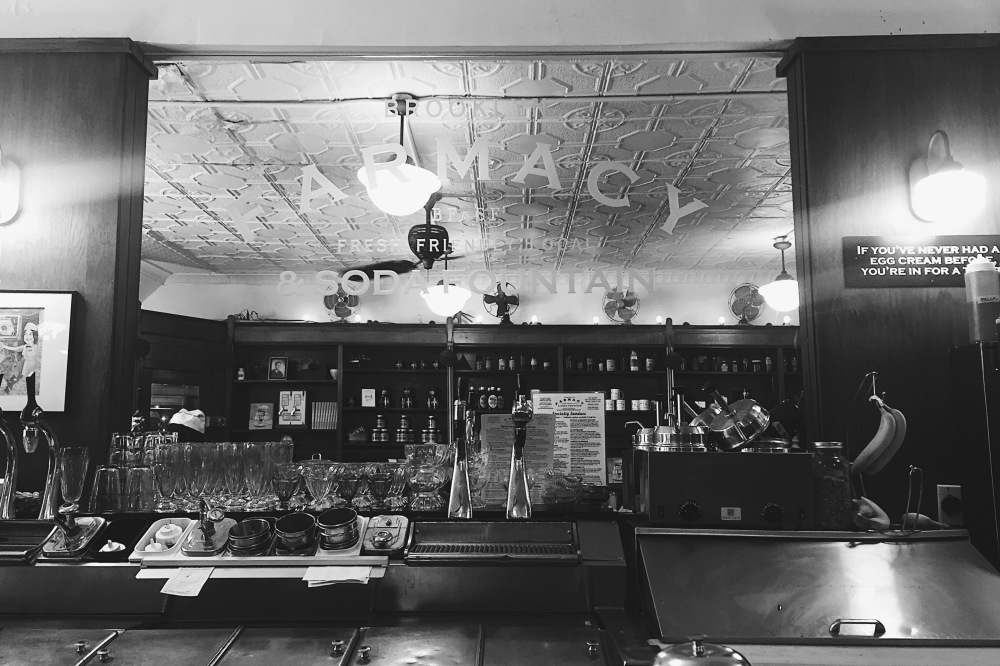 In case you didn’t believe that it’s like a blast from the past, I edited this photo to be in black and white!

Like I said, or at the very least heavily implied, stepping into Farmacy is a little like stepping through a portal into another era, one where women in cat-eye rimmed glasses and red lip stick and men with handlebar mustaches make you an ice cream sundae, a milk shake or an egg cream. You might say, “But I see people like the ones you’ve described all the time in Brooklyn and I didn’t step in a time machine.” This is NOT in Williamsburg, this is in Carroll Gardens, home of strollers and brownstones, not home of people living out a Portlandia sketch. So it is a little like going back in time. Again, I am always right and you are always wrong. Let’s establish that now so we can move on with the rest of this post without further interruption. Back to the foodstuffs; if you’re wondering what an egg cream is, look no further than the picture below. It should answer any questions you may have.

If you’ve never had an egg cream before you’re in for a…what?! Tracheotomy?! Nooo!

So by now, you’ve undoubtedly come to terms with the fact that this Farmacy leans more heavily on the “farm” side of it’s name as opposed to the “Macy” side. While they do sell some apparel, namely shirts that say “Jerk” on them, in general what you’ll get is locally sourced and made dairy products, served in traditional ice cream sundae glass goblets, but created with a twist. This twist can be as simple as a coffee flavored egg cream (or what I can only assume is a coffee flavored tracheotomy, because of the sign blockage I can only guess), or as complex as a sundae with potato chips that manages to posit the question “Who’s your daddy?” in it’s description on the menu. Because when I think ice cream sundae I think potato chips and then I think, “Wait a second, who’s my daddy? Is it that guy with the handlebar mustache. No, he looks too young, he probably lives in Williamsburg with two roommates and a stray cat. Or is it my dad and this is a time machine and my dad was actually a civil war hero? Oh wow, he’s bringing me something that looks like a sundae. Oh no, that’s a scalpel, I think he’s about to give me a tracheotomy!” And then I snap out of my daymare and order the ice cream sundae that wonders who my dad is, because dads are hilarious (Side note: I was once a dad for Halloween).

Tchotchkes and some clothes that say “Jerk.” Ya know, ol timey stuff.

So yes, I ordered the Mr. Potato Head sundae “as seen on the Food Network’s Unique Sweets.” In fact many of their specialty sundaes can claim fame on the ol’ media hype machine (that’s a thing right?). The Sundae of Broken Dreams has been “featured in the Time Out NY, New York Times Crossword,” the Affugazi Affogato “carved out it’s place in culinary history on ‘Bobby Flay’s Top 10 Restaurants’,” and 99 Problems, which is apparently a sundae doused in a thick vanilla milkshake, was “featured on Travel Channel’s ‘Food Paradise’,” because nothing says paradise like the words “doused” and “thick.” Needless to say, I see you Farmacy menu. Don’t be ashamed to say you were featured on Off the G, a WordPress blog!

Once you’ve ordered comes the next best thing after actually eating your lactose heavy concoction: watching everyone else’s orders come out and trying to guess what they got and wonder, “Did I make the right choice? Do I want to gain forty pounds or forty FIVE pounds? How much time do I have to sit on the toilet later tonight?” Don’t worry, there’s no wrong choice, unless of course you are lactose intolerant. If that’s the case, however, watching the variety of milky goodies come out is a good alternative to actually eating it as it’s a bit like a spectator sport. You never know what food is gonna be sticking out of where, and the towering creations could knock over at any time of someone sticks their spoon in at the wrong direction. Keep your cameras ready!

If watching food being delivered to someone other than yourself isn’t your thing, first of all you’re selfish, and secondly you can always watch them prepare the dishes since it’s an open kitchen. Are they making my order? For me the dead giveaway was the bag of chips. Not a lot of chips on the menu. When my Mr. Potato Head came out (and yeah, I ordered a mini version because I cherish my arteries) with it’s caramel, whipped cream, peanut butter, vanilla ice cream, and of course chips, I wanted to wait to see what my Farmacy visiting buddy ordered so I could sample both. They ordered a milkshake that came almost immediately after mine, with the excess milkshake served on the side in the metal cup they used to “shake” it. Three desserts for the price of two? Sure why not! I’m not going to the beach anytime soon! Finally it seemed appropriate to compare our orders. The newly added milkshake had notes of peanut butter, caramel, and broken up bits of ice cream cone. Oh, so we essentially ordered the same thing except mine is a sundae with POTATOES. 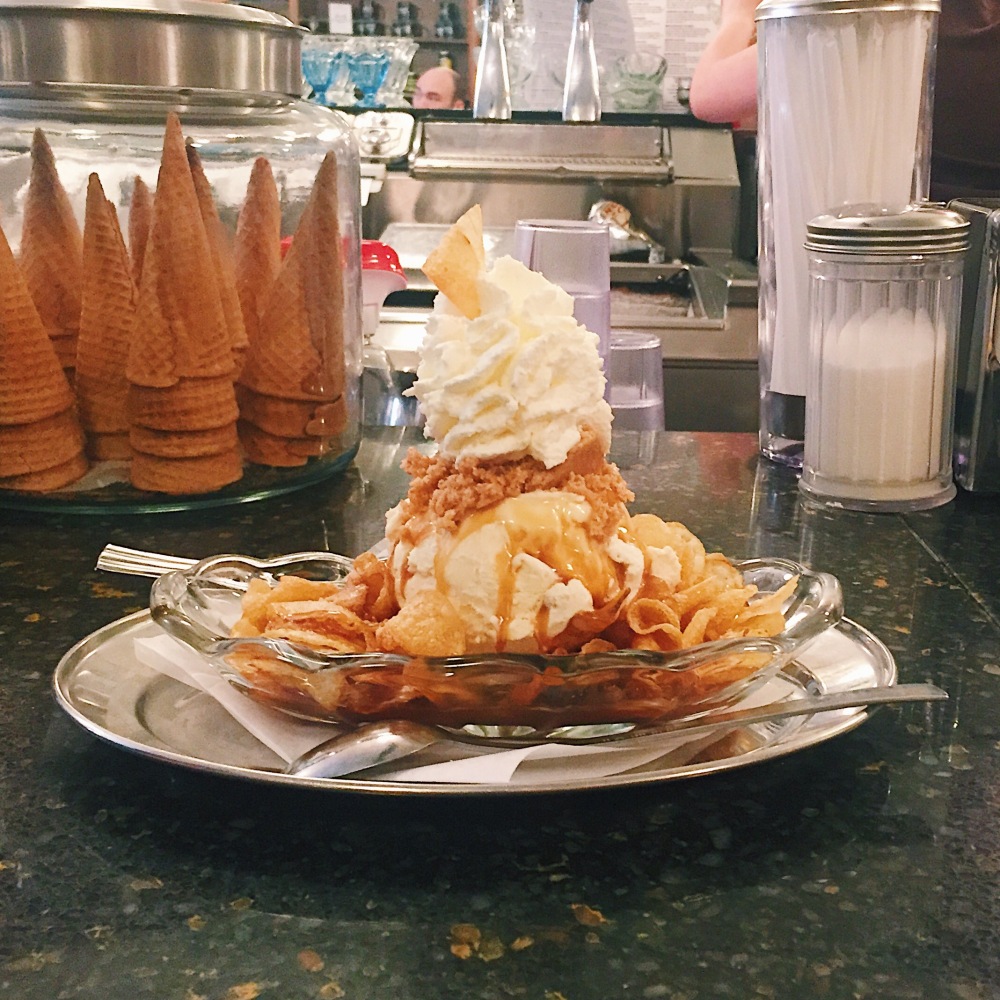 Are you my dad?

I prepared myself for buyer’s remorse and dug into my sundae. Five minutes later, after wolfing down the entire sundae, chips and all, I’m happy to report that I have no regrets. And three hours later when we took turns in the bathroom because we’re adults and the only dairy we put in our bodies these days is the milk in our coffee and our night cheese, I still had no regrets. Sometimes you need to revert back to another era, or when you were a younger age and milk and ice cream sundaes were a frequent occurrence. Then, and only then, can you see the question “Who’s your daddy?” and answer with a clear head, “Not you, mustachioed man with a scalpel. Not you.”

In short, enjoy your ice cream and call your dad. And as always-